The browser version you are using is not recommended for this site.
Please consider upgrading to the latest version of your browser by clicking one of the following links.

Ten years ago, network operators realized that the software-defined network was the way to deploy their network Core, and also the way to deploy the Edge. Today, the extension of Cloud-Native capabilities to a virtualized RAN is bringing web-scale benefits to operators, and virtualizing the network end-to-end – all the way through Layer 1 – is unlocking the greatest benefits possible.

This session will highlight recent milestones in industry’s transformation to cloud-native virtualized RAN, and the role that innovations from Intel Network Builders and the OpenRAN ecosystem will play in fulfilling the industry’s long-term goals for network performance, sustainability and efficiency. 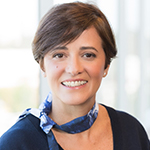 Cristina Rodriguez is vice president in the Network & Edge Group, general manager of the group's Wireless Access Network Division (WAND), and general manager of the Austin Design Center at Intel Corporation. She leads Intel’s efforts to provide innovative wireless access solutions in both traditional and cloud native networks, enabling the RAN of the future by bringing together 5G, the build out of the Edge and Artificial Intelligence. Rodriguez has full PnL ownership, responsible for strategy and business plans, technical product marketing, roadmaps, product definition, forecasting, customer relationships, investment decisions and GTM.

Rodriguez joined Intel in 2014 with the acquisition of LSI Corp.'s Axxia Networking Business from Avago Technologies Ltd., where she led and carried out software strategy. In her first Intel role as senior director of software for WAND, Rodriguez managed the division's worldwide software engineering and product development efforts. She also led the successful integration of the Axxia team into Intel and aligned the team's focus with Intel's networking business. Since joining Intel in 2014, her team has been recognized multiple times with Intel’s highest honor, the Intel Achievement Award, for their contribution to the company’s 5G leadership efforts.

Before her tenure at LSI and Avago, Rodriguez spent seven years holding leadership roles in software development at Agere Systems Inc. and its parent company, Lucent Technologies Inc. Earlier in her career, she worked at Zilog Inc. and at two startup ventures.